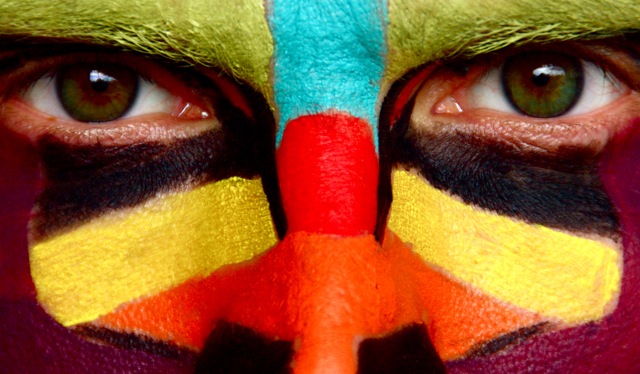 The Arab world lives in New Times & has New Heroes.  Focussing on Jordan: it's a place with new identity.  From an urge to liberate themselves from imposed ideologies, restrictive gender-concepts & social conformism; a progressive generation reveals itself in a series of portraits: New Mirrors.  Young people reflect on society who they are -rather then what their society wants them to be- by showing us an imagined identity.

The Metamorphoses are a way to undo the burden of uniformism and masquerade; to liberate a truth self-image.  By exposing those portraits in the street; we claimed the 'front-models' a place, a visibility and a role in the society of the capital Amman.


AAT FESTIVAL:
New Mirrors is created during the Aat-Festival: a cultural event in Amman/Jordan which celebrates International Woman's day.  The organizing 'Aat Network' establishes a debate on gender-equality and identity.  The festival creates a space to liberate expression and improves the discussion on gender-issues.  Within its frame, both sexes are defending the regional and global Women Rights.  The festival is directed by Lana Nasser and organised at Al-Balad theater.

A freedom of expression with Ziad E. Hajir

Behind the scènes; the making up for Ban Majali's
statement on woman-hood, collaboration with
Walid Zou'bi & Sleiman Tadros.

Driving the Dead Sea Road with Lina Soufan
for a photoshoot with knifes.


"New Mirrors" was a collaboration with Aat Network, at Al-Balad theatre.  Art Space 'Makan' offered me an atelier during the creation-proces.  The work is a result of many peoples warm involvement; thanks for the heart-related energy.  I thank all the people portrayed in this project for their braveness, beauty and their 'becoming'.